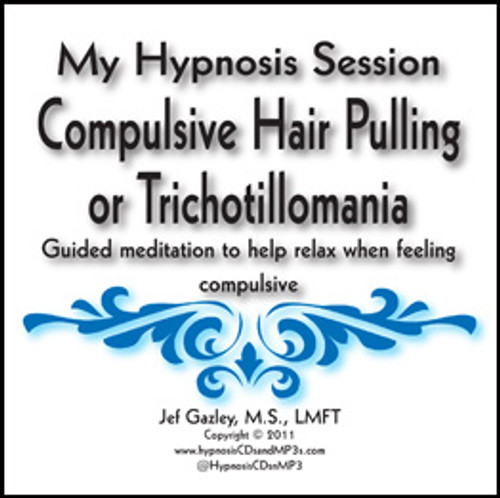 Trichotillomania is hair loss from compulsive pulling or twisting of the hair until it breaks off, and has been classified as an impulse control disorder. Symptoms usually begin before age seventeen. The hair may come out in round patches or across the scalp. It is a very disorganizing disorder and the effects of the condition are very disturbing both to the individual sufferer and their loved ones. Trichotillomania is not a simple disorder. It has a huge biological component and has been shown to involve a lack of GABA and serotonin which are two neurotransmitters in the body. It is even thought to be a symptom in common with attention deficit disorder and obsessive-compulsive disorder. Many clients have reported a dramatic relief of symptoms with OBSESS-care by ADD-care® and St. John's Wort. Once the biochemical component is dealt with hypnosis training has been shown to be extremely helpful with the compulsive behavior. Hypnosis has a therapeutic effect on the cingulated system and the basal ganglia where serotonin and GABA reside. Hypnosis can be thought of as an effective software program for the mind. This hypnosis CD calms the brain which helps the compulsive activity and pulling behavior. The suggestions and guided imagery in this hypnosis CD help teach self-control. This hypnosis CD uses beach guided imagery with background music. The hypnosis script is by Jef Gazley MS, LMFT who is a certified clinical hypnotherapist. Copyright © 2011.
×