Is that the reason I get abused? (Book On CD) 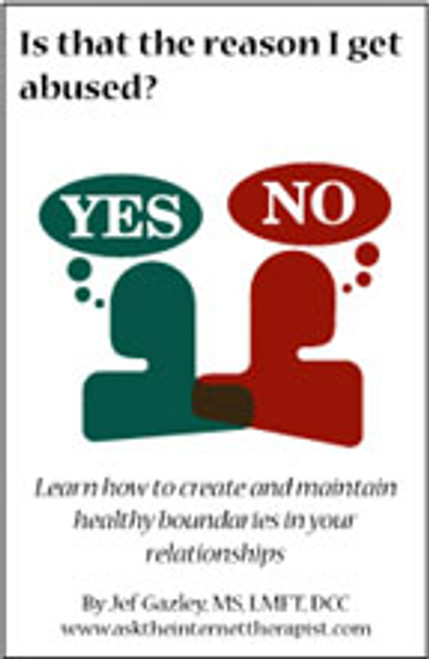 Is that the reason I get abused? (Book On CD)

This audio book on healthy boundaries by Jef Gazley, LMFT titled “Is That The Reason I Get Abused?” The following is an excerpt from that book. “Parents cannot teach appropriate boundaries unless they have them, and they can’t have them unless they themselves have been taught. That’s unfortunately how the “poisonous pedagogy” that we’ve been educated by for years and years continues to cause problems. Very often, in dysfunctional families, the idea of simple privacy, of allowing kids doors to be closed in the family home, is viewed as somehow an affront against the family system. There are very few instances of appropriate boundaries in these families. When a child does not have boundaries and has no idea of what normal is, it is very much like a doorway where the door is not there, just an empty room inside the child’s mind and feelings. That is essentially what kids in a tremendously dysfunctional family deal with. If somebody says something critical in a shameful manner, it will immediately have an impact on them and wash over them through the open doorway. The child will take it in and tend to believe it. That is an indication of having no boundaries whatsoever. They don’t realize that they can defend themselves, that there just might be the possibility that the other person is wrong about what was said, or wrong about the way it was said. As with any problem, there is a continuum of boundary difficulties that people suffer from. If a person has developed a few appropriate boundaries either in childhood or through therapy, it’s as if the doorknob is on the outside of the door, so that in general, their sense of reality is partially protected. But if somebody hits a weak or hot button for them, a sensitive area that has not really healed, it’s as if the abuser has opened up the door, thrown a bomb in, closed the door, and the person blows up with shame. When the person has developed truly appropriate boundaries, the doorknob is on the inside of the door. That means that if somebody says something that seems to make sense, the individual might open the door, really take a look at what has been said, and then decide if the information is appropriate for them or not. If the information is a correct criticism they will realize the difference between personhood, and behavior. As mentioned previously, guilt is about behavior, shame is about personhood. They’ll only open up to what makes sense. If not, it will bounce off the door and they won’t be personally affected by it. That’s a good indication of appropriate boundaries.” By Jef Gazley, M.S., LMFT Copyright © 2008

Is that the reason I get abused? (Book)

Is that the reason I have a substance abuse problem? (Book)

Is that the reason why I cannot communicate well? (Book)

Is that the reason why I cannot deal with stress after a traumatic experience? (Book)

Is that the reason I get abused? (eBook)

Is that the reason why I cannot communicate well? (Book)