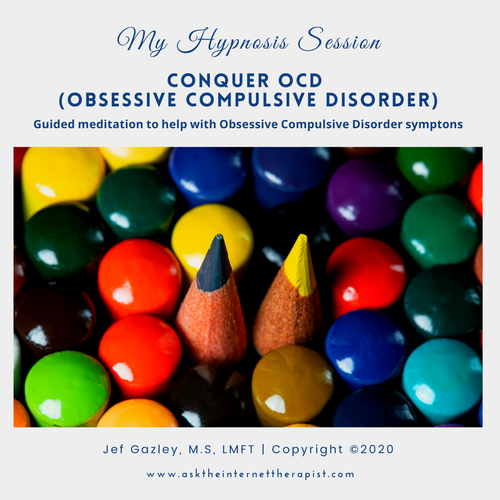 Do you suffer from obsessive-compulsive disorder or know someone who does and would like help? If so this soothing hypnosis audio file can help. This hypnosis MP3 uses beach imagery for easier trance induction. There are no subliminal messages. The suggestions are focused on general relaxation and the ability to better deal with OCD and its symptoms. Even though this is an excellent source of help for OCD, it should be accompanied by a therapy regimen recommended by a physician or trained psychotherapist. Obsessive-compulsive disorder is a major mental disorder that is best combated by several counseling methods. It is characterized by a lack of two neurotransmitters which are GABA that calms the brain and body and serotonin which is another inhibitory neurotransmitter. These natural chemicals that the body produces work on the cingulate system and the basal ganglia. When a person does not produce enough of these neurochemicals obsessions and compulsions are the result. GABA which is a natural amino acid helps this condition. Serotonin is helped either by an SSRI antidepressant or St. John’s Wort which is natural. We have had tremendous results by using St. John’s Wort and OBSESS-care by ADD-care® which is also a natural supplement. Emotional Freedom Technique or EFT which is an energy psychology technique has also been shown to dramatically lessen the symptoms of this disorder. Hypnosis is a great tool that has also had dramatic assistance with this condition as it calms these areas of the brain by accessing the subconscious. This magnificent hypnosis MP3 for obsessive-compulsive disorder lessens both the obsessions and the compulsions experienced with this mental disorder. This hypnosis audio file uses beach guided imagery with background music by Jef Gazley, M.S., LMFT, who is a certified clinical hypnotist © 2011.